One of the distinguishing features of Carnatic Music is its complex variety of tALas, that are rhythmic patterns employed in compositions. A common aphorism that pertains to music is "shruthiR mAta, laya pitA" (melody is mother, rhythm is father).

Creativity in carnatic music is not only expounded through rAga vistAra (elaboration of a rAga), but also through swaras. The usual pattern followed in concerts is:
The first and third aspects are extempore, i.e. one doesn't learn them up-front and reproduce them on stage - rather, they are manifestations of creativity.

Singing impromptu swaras pushes the boundaries of imagination, and is rewarding to both the singer and listener. The challenge mostly comes by virtue of not only adhering to the rAga, but also strictly conforming to the tALa (rhythmic structure) that is followed in the composition. Any number of swara cycles may follow the composition; these typically are sung at increasing lengths - first in a slow fashion and then with speed.

While the rAga vistAra is a platform for exchanges between the violinist and the singer; the swara section is a collaboration between the singer and the mRidangist (and other percussion artists), and to a lesser extent, the violinist. The penultimate and ultimate swara cycles generally showcase a singer's laya abilities. The last sections of these swara cycles generally employ enjoyable arrangements of swaras, and are juxtaposed by appropriate beats by the percussion artists. These mathematically formed swaras can be called as "kORvai" or "muthayi" swaras.

Except for the kORvai swaras, a singer is expected to sing what springs to his/her mind at that point of time. kORvai swaras may be rehearsed and practised by a singer up-front. The transition from extempore section to rehearsed section can be really tricky for a singer, since it needs to be so seamless that the listening experience remains unaffected. It is possible for experienced singers to bring about this 'point of inflection' in the most natural way

In the upcoming posts, I'll sketch examples of kORvais in different tALas.
Posted by Unknown at 09:39 3 comments:

In Sanskrit, yathi refers to an arrangement of syllables. In addition to pRAsa (rhyming words), Dikshithar has exquisitely crafted two kinds of yathis in his kRitis.

The Gopuccha yathi, as the name suggests, in shaped like a cow's tail. The sequence starts with a compound word, and progressively shorter, yet meaningful root words. There are atleast three examples of Gopucha yathis found in Dikshithar kritis.

In the majestic Anandabhairavi composition tyAgaraja yOga vaibhavam, the pallavi ends with a gopuccha yathi:

In 'mAyE tvam yAhi' set to the rare rAga tarangiNi, there is a shorter gopuccha yathi:

Yet another example of a gopuccha yathi can be found in the auspicious sRI rAga kRiti 'sRI varalakShmI':

The words in sRotovaha yathi are arranged in short to long order, like a flowing river. The example of this construct is found, again, in 'tyAgarAja yOga vaibhavam':

.. Phew! Anyone who read the last word in one go deserves a pat on the back.
Considering a viLamba rUpaka tALa kRiti like this, only a genius like Dikshithar could pull off such a feat.
Posted by Unknown at 21:38 4 comments:

The guru-shishya (master-student) parampara is central to the evolution of Carnatic music. Although compositions have been notated and codified to an extent, there is ample scope for improvisation and extempore for a performing artist. This could be through manOdhaRma - like rAga Alapana and swara singing. Even rAgas are always open to interpretation. The consequence of all this has been the system of "schools of music". We refer to them as bANi. This is similar to "gharanas" in Hindustani music.

Veena, being a complex instrument, has varied styles of playing. This variety includes: 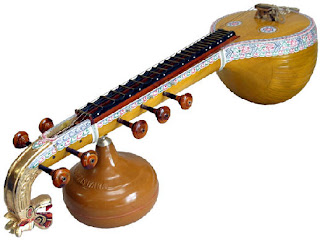 Unlike vocal music, bANis in veeNa are heavily influenced by geography. The bANis may be broadly categorized as:
Posted by Unknown at 00:15 3 comments:

A Dikshithar kriti on mahAlakshmi 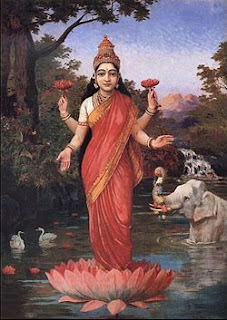 Lakshmi is traditionally known as the goddess of wealth: however wealth is not just materialistic; it can mean wealth of character, wealth of knowledge and so on. The following shlOka summarizes the eight different aspects of mahAlakshmi, together known as ashTalakshmi:

Unable to make their ends meet, Dikshithar was once pestered by his wife to borrow money from a money-lender. It is in this context that the kRiti "hiraNmayeem lakshmI" is said to have been composed by Dikshithar. He chose the sober rAga laLitha for this composition. laLitha is the panchama vaRjya rAga of the 15th mELa mAyAmALavagowLa:

As with other 15th mELa rAgas, the underlying theme is bhakti rasa. The composition starts in an unorthodox way:  with "D1 M1", and is sure to grab anyone's attention. In the pallavi, Dikshithar describes lakshmi as hiraNmayeem (the golden hued). He says he'll meditate on the golden hued lakshmi, but will not depend on any lowly human being (hIna mAnavAshRayam tyajAmi).

The anupallavi qualifies lakshmi as one who gives wealth, but dikshithar makes a point here: "chiratara sampat pRadAm" - which means wealth of an imperishable nature. lakshmi is the daughter of the milky-white ocean (kSheerAmbudi tanayAm); she emanated from the ocean, which the dEvAs and asurAs churned using the mandara mountain. A racy madhyama kAla sAhitya concludes the anupallavi:

A grand charaNa follows. lakshmi is described as residing in a white island (shwEta dwIpa vAsini), and even as srI kamalAmbika herself. She is worshipped by devas and humans alike. dIkshithar addresses lakshmi as "Mother" (mAtara), who wears a garland made of lotus flowers (abja mAlinIm) and decked with ornaments (mANikyAbharaNa dharAm). She is indiRa, who enjoys vocal and instrumental music (gIta vAdya vinOdinim) and is respected by girijA.

This is a classic departure from the usual "guruguha nutam" or "guruguha poojitham" - Dikshithar beautifully weaves in the "guruguha" mudra by specifying that lakshmi is the consort of kARtikEyA's mAtula (mother's brother, who is visHNu). Dikshithar also includes the rAga mudra (in laLithAm) effortlessly.

Out of the various renditions by vidwAns and vidUshIs, in my opinion, the one by DK Jayaraman stands out. There are no grand sangathis - the beautiful sAhithya, laLitha's lALithya and DKJ's pADanthara do the magic. NamaskArAs to my guru vidwAn S.Shankar who taught me this beautiful kRiti.
Posted by Unknown at 01:59 No comments:


The trinity of Carnatic music - comprising of Tyagaraja, Muthuswami Dikshithar and Syama Sastri - were a group of saint-composers who have influenced and shaped Carnatic music in a way no others have. The quality and grandeur of their compositions remains unparalleled to this day. My purpose in the next series of blogs would be to analyze and compare their compositions in various aspects such as:

Tyagaraja was the most prolific composer among the three; in the sense that the number of compositions attributed to Tyagaraja is more than Dikshithar or Syama Sastri.  He is said to have composed over 24000 songs under various genres, of which around 700 have survived today - thanks to his shishya parampara. This is in contrast to 300-400 of Dikshithar and around 80 of Syama Sastri.
Posted by Unknown at 01:28 No comments:

Email ThisBlogThis!Share to TwitterShare to FacebookShare to Pinterest
Labels: carnatic


One of the most important foundation block of the theory of Carnatic music is the system of rAgas. Besides being a scientific system of classification, ragas are capable of generating one or emotions (or rasAs) - such as pathos (karuNa), devotion (bhakti), valour (vIrya), joy (hAsya), etc.

Although a great number of rAgas find place in concert renditions, six ragas stand out - in terms of classicism, popularity, grandeur, and even being yard-sticks to evaluate the vidwat of musicians. These ragas are (in order of their appearance in the mELakaRta scheme):
Alapanas and kRiti renditions in these rAgas usually happen to be the "main" item in Carnatic concerts - Purists such as MS Subbulakshmi, Semmangudi Srinivasa Iyer, DK Pattammal and KV Narayanaswamy would abide by this unwritten rule almost every time, although there is an increasing tendency these days to present RTPs (Ragam Tanam Pallavis) in sub-main rAgas (such as sAveri or latAngi), lighter rAgas (like behAg and kApi) or even rare rAgas and vivAdi rAgas.

Four of these are mELa rAgas or parent rAgas, the other two are janya rAgas.  bhairavi inherits from the naTabhairavi mELa whereas kAmbhOji is a janya of the harikAmbhOji mELa. Interestingly, both are bhAshAnga rAgas; meaning they also have anya swarAs which are not found in their parent mELas. bhairavi takes the chaturashra dhaivata (D2) and it is used in the ascending sequences like P D2 N2 S. The descending passages remain true to the naTabhairavi mELa's structure, as in N2 D1 P. In the case of kAmbhOji, the anya swara is kAkali nishAda (N3) and is not as extensive in usage as D2 of bhairavi. N3 appears in what is called a vishesha pRayOga, which is S N3 P D2 S.

Another point to note is that kalyANi is the lone pRathi madhyama: all the other rAgas are shuddha madhyama. This is in concordance with the smaller number of pRathi madhyama rAgas that are in vogue.

Among the Trinity, contributions to kharaharapRiya have come in only from Saint Tyagaraja - it remains a mystery as to why the others didn't compose any kRitis in this rAga.
Most of the kRitis in these ragas are viLamba kAla (slow-tempo or medium-tempo) with long-drawn phrases, although there are a few racy numbers as well. This suggests the importance of gamakAs in these rAgas.

Due to the sampooRNa (having all swaras) nature and also being samvAdi, these rAgas offer immense scope for improvisation - in particular, rAga AlApana can technically last for a long duration without the phrases getting redundant or repetitive. Stalwarts are known to have sung AlAps for hours; exploring new realms of creativity each time.
Posted by Unknown at 00:30 No comments:

Other blogs of mine